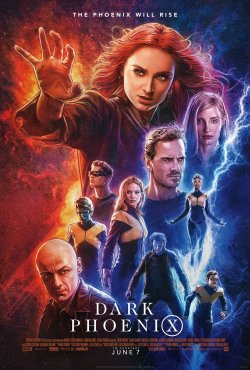 The Intro:
Oh boy… Well, here we go. Here I bring you the official Oberrated review on the final installment of Fox’s X-Men franchise, “Dark Phoenix”. This franchise’s last few films have surely not been bringing much to the table. From back and forth reviews, messed up timelines, and shoddy performances. Hopes are not high for “Dark Phoenix”, myself included. Without further ado, let us get on with it.

IMDB Summary:
“Jean Grey begins to develop incredible powers that corrupt and turn her into a Dark Phoenix. Now the X-Men will have to decide if the life of a team member is worth more than all the people living in the world.”

The Oberrating:
I reserved hope that I may actually still like “Dark Phoenix”. I mean, I liked Apocalypse so there was a chance, right? Wrong. Honestly, this is X-Men 3 all over again just done a little bit better. Bland story, bland villains, same war on self with Jean trying to figure herself out. Literally same story just different (and hardly better) cast. I kind of do not know how to expand on this without getting too spoiler heavy (which will be at the bottom of the review). Regardless, if you thought the film was going to be mediocre or bad, you are probably going to still think that after finishing the film. A forgettable and dull finale for a franchise that started so strong years and years ago.

Whoever’s idea it was to put so many bland and boring characters together on one screen needs to be re-evaluated for their position. I make this statement not on the perspective on the actors not doing a good job but more so on the fact that the characters themselves have zero charisma and appeal. Sure, the villains are aliens and should be as such. But between the aliens, Jean Grey, Cyclops, the always serious Charles Xavier, Mystique, and Storm, this is just an army of monotone and unemotional characters. Okay, maybe not so much Jean due to her emotional war with herself, but everyone else….sheesh.
I feel the dialogue in the film is a good follow-up to bland characters. So many lines in “Dark Phoenix” are downright eye rolling and cringe. The main villian, Vuk (Jessica Chastain) says some of the most cliche lines imaginable. Mystique is dull and unconvincing. I was afraid of her being a leader of the X-Women…I mean X-Men… in Apocalypse, in which I was delightfully impressed by her. Well it seems I was a movie early cause she assumes that role here and my fears of her being unconvincing then comes alive here. A Pg-13 F-bomb is dropped here and in the worst way possible. This was just an unconvincing batch of characters for a lackluster movie.

To finally praise some parts of the film, I start with the characters. Easily, as it has been in the past, Michael Fassbender is a master-class performer in my eyes. I have loved a number of his movies, including X-Men installments. Here in “Dark Phoenix” he puts forth a commendable performance but not nearly enough to save the film. Next to him, Sophie Turner does a good job with what is given to her. She is an emotional performer and does Jean well.
In regards to the story of the film. Although predictable (because c’mon, we have seen this before) the dramatic story line was interesting and enticing to me. Honestly, that is about all I could give it a positive note for regarding story.

The Wrap-Up:
“Dark Phoenix” really is just a dull and “there” kind of movie. Nothing is mind-blowing about it. Nothing had me sitting there thinking “Wow, I really want more of this”. Painful dialogue, an already done film, horrendous villains, forgetful and bland characters. This movie simply just does not have much going well for it. The silver-lining, I guess, is the fact we now have a Marvel Studios X-Men waiting in the future for us as this franchise has officially come to a close.

I’m gonna make this a quick bullet section cause I don’t want to spend too much time on this shit show.