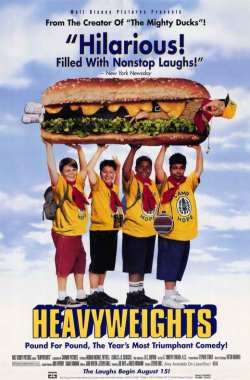 The Intro:
This here is probably one of my funniest requests for multiple reasons. One, because of the content that this film has and when it was released. Two, because it literally is funny as hell. This request is on DISNEY’s “Heavyweights!” If you do not know of this movie, uh, well let’s say it is not exactly the most accepted kind of humor for today’s society. However, if you like your comedy a little relentless at times, this is proper for you. Now without further ado.

IMDB Summary:
“Plump kids are lured into joining a posh fat camp with the promise of quick weight loss and good times, only to find that the facility is a woodland hellhole run by a psycho ex-fitness instructor.”

The Oberrating:
Hahahaha, good lord, that summary! Like I said, not exactly the most “accepted” kind of humor for today’s culture but definitely still a form of comedy people like to watch. This content is just wild to me. A Disney movie, rated Pg, dropping a number of mild profanities, a kid mooning a camp instructor, a number of fat-shaming jokes, and the wild list goes on. For my taste in comedy, this falls in line with it. So, I had a good bit of fun with this.

While “Heavyweights” has an excellent cast, young and old, the leader of this cast is Ben Stiller without a doubt. He is absolutely hilarious and relentless. Sure, he is the villain, but this is a comedy, and much of the comedy comes straight from the fitness instructor’s mouth. Now, while Stiller is definitely my favorite in the film, he is not the only comedian. All the kids are absolutely hilarious as well. There is comedy to be had in all places of the movie. I could not say anything bad about anyone in the cast.

The Wrap-Up:
The 90s was wild, man. A movie like this would not be made today unless it got hit with a big fat R rating and definitely under a different studio. Nonetheless, “Heavyweights” is hilarious! Stiller and company put on a great show for those who like a little more crude humor. Sure, the story is a bit absurd, and obviously, as I said, some may not like the subject matter, but hey! The entertainment is in the eyes of the viewer.