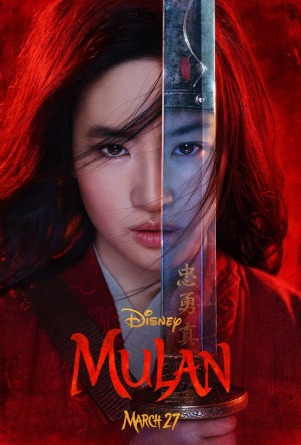 Scenario: It is December 17th, 2015, a Friday. You’re a parent, a wild nerd, a significant other, or a random Joe Schmo looking to see the next big thing. You pre-paid your ticket/s for “Star Wars: The Force Awakens” weeks or months in advance for this experience. 20 dollars for just yourself, or maybe 100 dollars for your family and/or friends. The hype is unreal.

Movies, man, they are an experience! Except pump the brakes. Actually, bring them to a screeching halt, because it is the year 2020, and you are a$$ deep in the Covid-19 pandemic. Movies are closed, everything goes digital, and those digital movies? Yeah, most of them are garbage. All those big time movie releases that were on schedule to come out have been delayed by months and years.

However, news has now broke that the anticipated blockbuster, “Mulan,” is now going straight to digital release via Disney+. The catch? You pay 29.99, on top of your subscription fee, for it to be streamed… Ha, yeah… About that…

29.99 is an absolute freaking joke! Let me break this down. This strategy favors one demographic: a family. Which, in turn, was maybe was the plan the whole time from Disney. A family goes to a theater and drops 50+ dollars on tickets alone. Then they drop another 40+ on concessions. This demographic is literally the only one getting anything out of it. Now let me explain everything else that pisses me off about this.

“Mulan” is a live-action remake of its 1998 predecessor. Every live remake has done well, financially, in theaters. I wanted this movie to hit theaters so bad for multiple reasons. Reasons like Asian representation and the lone fact that I love this movie. It was near guaranteed to kill the box office. Releasing this movie digitally for 29.99 will not make anything near what it would make in theaters, reason being the fact that only moms and dads would be buying it for their family. This wide difference in people buying the movie is going to return only a fragment of the money back to the studio. On top of that, with every big time movie already being pushed. Why not continue to push “Mulan” like all the others and make the big time money like it is almost guaranteed to make?

Now why do I only single out families for buying in on this garbage strategy? Because a large majority of people in the younger demographic, as well as just simply computer techs, know their way around a computer and the internet. What I mean by this is that piracy, streaming, and file sharing exists! We can not play ignorant to this, and how a large population of people pirate movies. Sometimes it is even sooner than movies hit theaters, which is just ridiculous, but it does happen. At such a ridiculously high price, this is absolutely asinine. I know I am not alone when I say that I will not even pay more than 5 dollars for a digital movie, especially on a service I am already paying monthly for.

It is reported that this is not going to be a lasting model for delivering new content. Yet, it is very clearly a testing phase of seeing if this works. Hell, “Hamilton” was a hit release, but you know…it was free. Regardless of if this is something companies want to stick with, or if it is just a one off (that makes zero sense to me). This whole scenario is outrageous and I honestly see no benefits anywhere besides for some families. Thanks for ruining a release for me, Disney! For ya’ll planning on paying, enjoy paying the 30 dollar fee ON TOP of the subscription fee of 7 dollars that you are already paying for. It is simply genius!

*Edit
My friend Keith had an excellent counter perspective to the Disney strategy. Here’s his thoughts:

“Good thoughts. But keep in mind other countries who have handled the pandemic already have theaters open. Like China, which is a huge market. Especially for Mulan.
So they want to release in China and Europe now, and that’s where the piracy will start anyways. So offering at least some option in the US is an attempt to counter that.
I did some math yesterday, and with almost 30 million US subscribers, they only need half to bite on Mulan to gross $400 million. It’s possible. Plus that all goes to Disney instead of any split with theaters.
It’s an evolving industry for sure.”

No Copyright infringement is intended.

2 thoughts on “Mulan to Premiere on Disney+ – Wait, is This a Joke?”