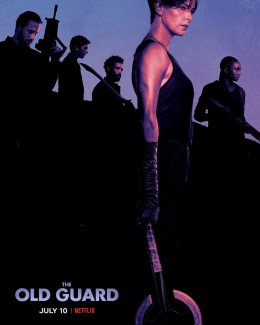 The Intro:
Listen, you do not have to sell me on an action flick starring Charlize Theron. Between “Kubo and the Two Strings”, “Mad Max”, “Atomic Blonde”, “Hancock”, and so much more, she is one of my favorite actors in the game today. Aside from Theron, “The Old Guard” seemed to be right up my alley. Trailer was decent, cast looks solid with some big names and newer names. I was all ready to dive in.

IMDB Summary:
“A covert team of immortal mercenaries are suddenly exposed and must now fight to keep identity a secret just as an unexpected new member is discovered.”

The Oberrating:
CHARLIZE CAN DO NO WRONG!!! “The Old Guard” is a dope action flick! Anytime the heat started to kick up with the action scenes, they started to kick major ass. The choreography, the acting, everything was on point and effective. Everything I liked from previous Charlize action films hit right on the nose again here. From the gun scenes to the hand-to-hand combat, everything was on point.

All the actors chosen for “The Old Guard” were almost perfect for the scale of this kind of movie. Clearly, Charlize was effective and perfect. KiKi Layne was very impressive for me. She was convincing and equally a badass. I am for sure on board to get behind any KiKi Layne project in the future. The rest of the old guard were well picked and had equally important and memorable moments, unique to their own characters.
My one issue with the characters came with the villain, Merrick. For me he was a whiny man-child and just did not sit well with me as he tried to pull off the big pharma mad scientist. He simply fell behind in the dust next to the talent he was surrounded by.

One bit that I found tough to digest was trying to follow hundreds of thousands of years of history, since the old guard have lived for so many years. The movie tries its best to fit in some information to explain the history and events that happened while also trying to continue the main story line. Sometimes it simply felt too crammed.

My last bit that bothered me at times was the score. The mix of EDM, R&B, Hip-hop, alt-rock, and others just did not fit in most cases. There were some EDM pieces that I could get behind, matched with some action scenes, but otherwise the music did not match its moment.

The Wrap-Up:
If you were looking for the home-cooked meal with a movie choice, this is it. Available on Netflix, “The Old Guard” is kick-ass with a decent story to boot. Sure there are a couple blemishes here and there, but a strong cast and especially well-executed action scenes are enough to entertain most watchers.