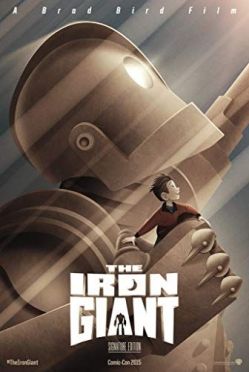 The Intro:
I have a timeless classic for you here thanks to the request from my friend Matt. With this post I look at “The Iron Giant!”

IMDB Summary:
“A young boy befriends a giant robot from outer space that a paranoid government agent wants to destroy.”

The Oberrating:
I have seen this flick a handful of times now, and every single time I think of how much this is not for little kids. Some may be able to handle it, but I really do think this is for the older kids that can take on some life moments. “The Iron Giant” explores many key topics like death, growth, anger, understanding, and so much more. A key theme is that it is set around the Cold War era, I mean c’mon! This is some grown individual material! Regardless, these themes and topics are approached delicately where a young kid, as well as the adults who watch it can understand it. A fine blend of a story for all ages.

The characters are quite rich as well, now that I think about it. All our key characters bring important arcs to the story. Clearly, Hogarth and the Iron Giant are our key one-two punch. These two explore many of the topics I spoke about before while also teaching each other along the way.
My personal favorite is Dead, voiced by Harry Connick Jr. His personality is slick and charismatic. I would even go to say he tries to be the “cool cat” early but then turns out to be just a silly scrapper. Most definitely one of the funniest players in the batch.
Another I want to focus on is my most hated yet equally important character to push the purpose of the film, Kent Mansley. Kent is the government agent who is trying to find the Iron Giant and wishes to eliminate him. Kent believes the robot was sent from an enemy country to invade and attack America *cough cough, very Cold War*. Kent goes to such lengths to defeat the Iron Giant that he defies orders and calls on a bomb to destroy it. However, while not paying attention, he calls the bomb on his own location, as well as many others. While he tries to put up a front as the tough guy, it is very clear that he is a coward and afraid for his life. Kent can easily be compared to the state of the nation during the Cold War where many people were paranoid of attacks on the nation. This was an excellent use of character to draw the comparison to this subject.

The Wrap-Up:
“The Iron Giant” is as excellent as I remember. It stands the test of time as one of the best animated films. With excellent characters, a story to be enjoyed by both kids and adults, and also approaching themes with grace that many kids’ films fail to do so, “The Iron Giant” proves to remain elite. If this has somehow missed your eyes, most definitely give it a view when you can. Just because it is animated does not mean it can not entertain older eyes!