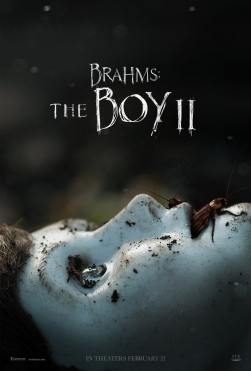 The Intro:
Another early year horror flick for the world to feast their eyes on. I took an interest to this one solely because I was a fan of the first one, “The Boy” (Apologies for the very rough looking old review) from 2016. The first had some fun twists, decent jump scares, and was just some overall fun. Now I approach the sequel, “Brahams: The Boy II” with caution and hope. However, I expect the worst, but who knows?! *shrug*

IMDB Summary:
“After a family moves into the Heelshire Mansion, their young son soon makes friends with a life-like doll called Brahams.”

The Oberrating:
*Spoilers
Yeah, that was trash… Honestly, I am kind of upset about it. I expected it to be an under-performing film but it was aggressively bad. To start with, the entire purpose and reasoning for Brahams and who Brahams IS, is completely ruined, in my opinion, compared to the first film. Brahams is not a spiritual entity in the first film. It is a 40 year old terrifying hulking man that is fucking with the main characters in the first film. Here? Brahams somehow became a spiritual possession doll and the real Brahams dies. This sequel just ultimately grows to be pointless. Chalk it up as a cash grab that surely is not grabbing any cash as far as the box office results go.

As for the element of horror, one would think that a cheap horror sequel cash grab would load up on attempted jump scares since its demographic is a bunch of teenagers and cheap horror thrill seekers but nope! The Boy II comes with barely any worth while scares and extremely ridiculous ones at that.

Just trudging along here… Now the story. Ugh. Cookie cutter horror story. Kid is the focus. Somehow has a connection once they arrive at the estate. The parents are suspect to the doll or what could be wrong with their kid. Then they break the spell… or did they? CLIFFHANGER!!! A terrible cliffhanger at that. It just all seemed so childish and amateur. It is no wonder that this film was a February release.

The Wrap-Up:
I try to find redeeming qualities of every film but I truly struggle here. I guess young Christopher Convery was good for what it is worth but all other performances were slept through. As I said prior, the story was lazy, the horror element was abhorrent, and to be a sequel to the 2016 one, this was incredibly disappointing. Honestly, as a fan of the 2016 one, I must say avoid this. It simply not worth the time.