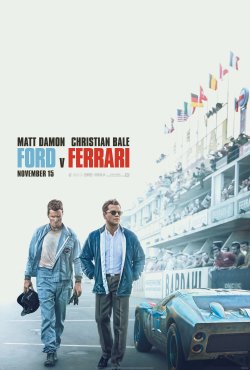 The Intro:
Chalk this one up as another film surely to do fantastic after putting together a cast like this and directed by the boss himself, James Mangold. It follows the events of the legendary Le Mans race where Ford famously faced off with Ferrari. Unfortunately, I missed this one in theaters but man oh man did this have all the makings for a movie I’d love; James Mangold (director of Logan), Bale, Damon, and my boy, Jon Bernthal!

IMDB Summary:
“American car designer Carroll Shelby and driver Ken Miles battle corporate interference and the laws of physics to build a revolutionary race car for Ford in order to defeat Ferrari at the 24 Hours of Le Mans in 1966.”

The Oberrating:
As I expected, “Ford v Ferrari” was quite good. The stand out impressive element of the film was undoubtedly the performances. Christian Bale is unbelievable. His fiery and confident demeanor was awesome to watch as he interacted with his counterparts. Matt Damon was also excellent as Carroll Shelby. Suave and persuasive, his Carroll Shelby was a southern boss.

When it comes to films based on true stories, I am always treading carefully on if the story is going to be a cohesive and smooth story. When it comes to “Ford v Ferrari,” the story was delivered flawlessly as I would expect of a Mangold film.

However, while the story was executed well, a story with this content could only hold my attention so long unless I were to feel fully engaged. By the midway point leading to the Le Mans I started to fade out of focus on the film. Once the racing kicked in, my adrenaline for the race hit too.

The Wrap-Up:
Another flawlessly directed film from Mangold as well as exceptional performances under Mangold. Despite me losing some interest in the build up portion of the film, it still was quite a great piece of film.