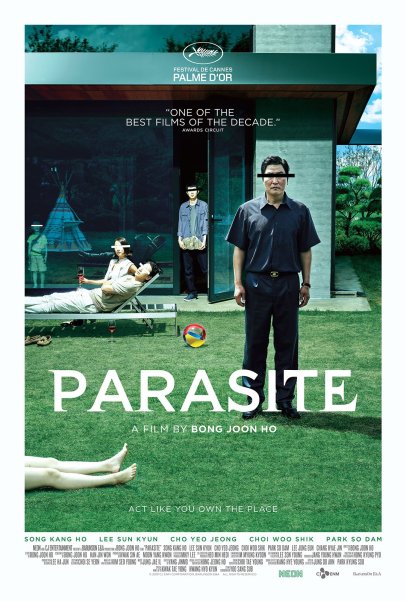 The Intro:
“Parasite” busted onto the scene and into my focus after a huge social media boom once it hit film festivals and ultimately, the public eye. Unfortunately I missed it in any local theater run but thanks to the Best Picture nomination by the Academy, I got the opportunity to see it in my local theater. Boasting a number of new records with its nomination, I was excited to finally get the full theater experience with “Parasite.”

IMDB Summary:
“All unemployed, Ki-taek and his family take peculiar interest in the wealthy and glamorous Parks, as they ingratiate themselves into their lives and get entangled in an unexpected incident.”

The Oberrating:
With all the praise and hype, I was truly hoping “Parasite” would live up to it all. Well, it surely did. It is tough to talk about this film without spoiling it but I am going to try to dance around the spoilers.
The story of “Parasite” is an absolute trip. From the start, I felt for the family that the movie focuses on.  However, some twists and turns (and I mean “some” in the lightest way) start to twist the moral compass for characters in the film. I hung on every moment, every word, every piece of symbolism and I ate it up. Once again, I can not really dive deep into the film for fear of spoilers but just know, this story is a wild ride. So wild, the focus on subtitles did not distract me in the least bit.

I can not begin to stress the importance of every character in this movie plus the performances put forward into them. Personally, my favorites are split into two, Yeo-jeong Jo and So-dam Park. Park was my favorite due to how simply cerebral she was in her actions. Jo for her blissful ignorance but equally important contribution to the story as the mother of the Park family in the movie.

The Wrap-Up:
The layers to this film. The symbolism. The performances. “Parasite” is unbelievable. Without being overly violent, or being some kind of thriller or horror flick, “Parasite” kept me on the edge of my seat and hanging on every word. A story, at its core, about class warfare. “Parasite” is for anyone who can bare to watch an international film with subtitles and still feel its purpose.