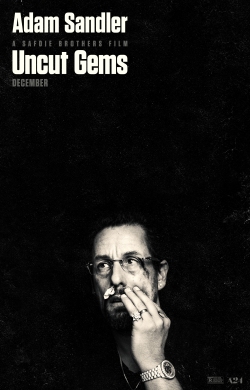 The Intro:
As if I needed more to be hooked into an A24 film. Somehow they continue to push the envelope and add more unique actors to more ambitious projects. For the next hotly desired A24 film, we have “Uncut Gems” directed by the Safdie brothers (Good Time) and starting the legend himself, Adam Sandler.

Yes, I thought the same thing. “Adam in an ultra serious movie? No way in hell”. Well, it is here, and it is making a statement!

Fair warning, this review will contain light SPOILERS. So unless you do not care or have seen it already, tread carefully!!!

IMDB Summary:
“A charismatic New York City jeweler always on the lookout for the next big score, makes a series of high-stakes bets that could lead to the windfall of a lifetime. Howard must perform a precarious high-wire act, balancing business, family, and encroaching adversaries on all sides, in his relentless pursuit of the ultimate win.”

The Oberrating:
“Uncut Gems” is a beast of a movie. The pacing of this story I would describe as nothing short of manic mayhem. From the start, we witness Howard (Sandler) moving jewelry around to make a couple thousands per sale, only to to give himself more time and/or more loaned money to try to turn into a higher value. This fast lifestyle quickly catches up to him, and the tension rises higher and his loan sharks get hungrier and hungrier. Howard’s opposition breathes down Howard’s neck to the point of my heart racing each scene he is getting shaken down. As if you would think this pace could only continue for so long, it gets more and more aggressive up until the very end. This pulse-pounding tension does wonders for the thriller vibe of this film.

A major point of conversation is Sandler’s performance in “Uncut Gems”. A common prediction may be that Sandler is not a “serious” actor. Some may be so ignorant to the point of saying this movie would not be worth it because he simply could not pull it off. Well, to those biased viewers, you are far from correct. Adam Sandler goes to another level with his performance as Howard Ratner, the New York jeweler and gambler. At first I almost just figured Howard was a moron always looking for his next big score but just at about the third act, his charade breaks and I/we see his true intentions and feelings. An exceptional performance.
Aside from Sandler, all around him are talented acts to their own right. One shock was Kevin Garnett who was even half decent himself. Truly though, the entire supporting cast was a solid effort, just further boosting Sandler and this film.

The Wrap-Up:
A frantic and insane retro thriller. I honestly did not breathe for two damn hours. The story is relentless, the characters are suffocating, and the performances bringing these characters to life are wonderful. Every scene felt like a live New York public space. The Safdie’s sure know how to bring urban life alive on the screen. Honestly, I tried, and I can not say anything negative about this film. Maybe some characters have strange appearances and are kind of pointless. Maybe I can say The Weeknd was a cash grab character and kind of useless (besides the pushing of Julia’s character). But, again, these minimal moments hardly take away from this cinematic experience.