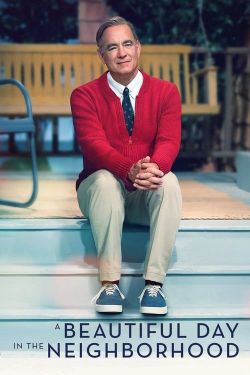 The Intro:
It is truly incredible and heart-warming for me to be writing this review. A local legend in my hometown, Mr. Rogers, has a full feature length film that the world is now watching. From one perspective, I see this film as a local special. Only a few will watch and Pittsburgh will (mostly) love it. Then from the other perspective, this film is being watched by my cousin in Kentucky, my movie friend in California, a blogger I follow in Florida, and so many other different eyes from different locations.
From Kentucky to California to Florida and now a return trip to Pittsburgh, here is my review on “A Beautiful Day in the Neighborhood”.

IMDB Summary:
“Based on the true story of a real-life friendship between Fred Rogers and journalist Tom Junod.”

The Oberrating:
I will admit, I was cautious entering my auditorium, finally for my view of “A Beautiful Day in the Neighborhood”. My childhood was about to be revived by Tom Hanks and company and as with any film, positive reviews or not, anything is possible when it comes to personal reception. Well I am happy to say that this movie was nothing short of blissful. The kind soul that was Mr. Rogers is fully brought to the screen through Tom Hanks portrayal of the children’s show legend. This movie made me feel damn near every emotion. There were moments that I felt angry, sad, and happy. I was laughing, I was upset, I felt empathy, and I felt alive. Honestly, I think this was the purpose of the film in ways. Mr. Rogers did not want his viewers to hide their feelings and this film surely brought out all kinds of feelings, if you allowed it to. In summary, “A Beautiful Day in the Neighborhood” was a full embodiment of Mr. Rogers’ show and who was/is Fred Rogers and what a beautiful one it was.

As if you could not already expect it after that first bit, the performances here are stellar. Tom Hanks owns the role as Fred Rogers and it honestly feels like the spirit of Fred is alive and well on the silver screen as Hanks gives it his all.
Co-star Matthew Rhys plays the interviewers/reporter Lloyd Vogel who is writing an articles on heroes. Rhys is equally impressive playing a dreary and mostly broken Lloyd Vogel who is as opposite as Fred Rogers as they could come. For reasons I did not research, Lloyd Vogel is based off of writer Tom Junod and his article about Fred Rogers. Regardless of the difference in name, the article and film coexist together pretty well. Which leads me to yet another aspect of the film I am a fan of.
By the way… here is the actual article written by Tom (“Lloyd”).

Films based on a true story, or events of a true story, are always so loosely based. When that little phrase is pasted at the beginning of a movie, audiences freak out and go “OH MY GAWD, THIS IS A TA-RUEEEEE STORRRRYYYY!!!”. Yes I am looking at you Paranormal Activity. Or even one of my favorite comparison in both admiration and comical reasoning, the film “The Strangers”. Which was based on literally one moment which then transpired into the legendary feature length film. But I am straying away from the topic. What I mean by all of this is that is “A Beautiful Day in the Neighborhood” was such a long term project and as accurate as possible due to the production company working so closely with the Rogers estate. The final product provides us with a film that, like I said, was as if the spirit of Fred Rogers was with us on the screen.

The Wrap-Up:
Well, as you may see, I did not have a negative portion within my Oberrating. “A Beautiful Day in the Neighborhood” was exceptional. I practically have nothing to say badly about it but I will say the one thing that bars me from giving it a 10/10 would be its rewatch value. That is a major factor that plays into me giving a perfect rating and I feel this is a one and done or at least rewatch every once in a blue moon. Beyond that, as I said, the movie is excellent. It truly represents Fred Rogers and who he was as both a hero to the community and as a human being. The performances were excellent as well, as I said previously. If you want a film that is practically the definition of a feel good, heartwarming film, then “A Beautiful Day in the Neighborhood” is the film for you. Quite perfect for the Thanksgiving and holiday season.