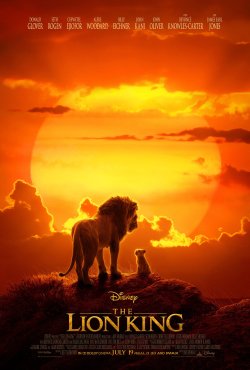 The Intro:
Awh boy, here we go again. Disney is delivering yet another timeless classic but re-imagined with cutting edge effects, gigantic casts, and the same shit over again. How else do I introduce a Disney re-imagining? I’ve done it multiple times now with the likes of “Beauty and the Beast” and whatever else I have reviewed. I don’t know, I’ve lost track. So… HERE WE GO!

IMDB Summary:
“After the murder of his father, a young lion prince flees his kingdom only to learn the true meaning of responsibility and bravery.”

The Oberrating:
It sucks for me because I can see both the negative and positive of a film of this caliber. On one end, the Disney mega-fans are probably over the moon in love with the opportunity to watch a new style of “The Lion King” and sing their songs all over again. Likewise, the kids are sure to love this as well, whether they have been raised on our childhood animated film or if this is their first time around with the title. Yet on the flip side of the coin, what the hell does this even bring to the table? Along with every other Disney re-imagining/live action film that they are doing. I personally have not even cared to catch them all in theaters and have no itch to go out of my way to see them once I get an opportunity. To this date of making this review. I have not seen “Dumbo” (2019), “Aladdin” (2019), “Christopher Robin” (2018), and I can’t even remember if I watched “The Jungle Book” from 2016. It ultimately seems like they all either are faithful remakes, respecting the original and literally translating them to the new age or they are garbage disgraces that change the entire history of the originals. “The Lion King” pays its respects with nearly frame by frame masking of the original but not nearly the same emotion or passion that the 1994 version delivers.

What I spoke on already is what primarily drives a positive rating. The 2019 version pays proper respect to the 1994 version, just with a state of the art animation styling to reskin it to a present day style. It looks beautiful. The water, the animals, the bugs, almost literally everything. I felt like I was watching a Disney Nature film at times. So clearly, the production quality is there and the faithfulness of making the same movie grants a positive reception for me, however…

Way, wayyyyy overhyped. The cast listing was announced months ago and I will admittedly say that I was floored by the cast listing. Donald Glover, Beyoncé, Seth Rogan, the return of James Earl Jones, and just simply so many more huge names. Now that I watched the film, I find myself not caring one bit. No one blew me away like I would expect such large names to do. Although I did get a huge smile on my face once I heard Glover singing his tunes and start voicing Simba, he didn’t do anything too special. Beyoncé simply was not good. Chiwetel Ejiofor as Scar was grim but not as effective. James Earl Jones is solid, cause, you know, he literally is the same Mufasa as ’94. The home run performances are actually within Seth Rogan, Billy Eichner, and John Oliver. For the money spent, this was a totally underwhelming element of the film.

The Wrap-Up:
Of course this movie is going to do well. It’s the freaking Lion King. The nostalgia factor is real. The hype is real. The demographic reach is gigantic. Almost everyone and their grandmother is going to see this. All of this despite an underwhelming result. Welp, here’s to hoping “Mulan” is gonna be better.