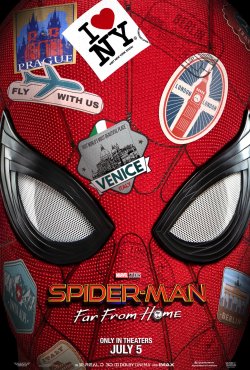 The Intro:
“Avengers: Endgame” is over, the results have happened. Now we were at our first film post Endgame and the Marvel universe will never be the same. Yes, I am tip toeing the hell out of spoiling Endgame although I should not care one bit cause if you are reading this without seeing Endgame, what the hell are you doing?! But regardless, my kindness consumes me and I will give this as my only warning; when the Oberrating comes, all spoilers are set to fly.

Today you read the Oberrated Review of “Spider-Man: Far from Home”. The first film following the events of “Avengers: Endgame”. I for one am eager as all hell to see what comes next, nervous even. And now, I dive headlong right into the world of Spider-Man and the next story of the Marvel Cinematic Universe.

IMDB Summary:
“Following the events of Avengers: Endgame (2019), Spider-Man must step up to take on new threats in a world that has changed forever.”

The Oberrating:
I start with saying one major comparison critique: “Spider-Man: Far from Home” is leagues better than “Spider-Man: Homecoming”. Despite Michael Keaton’s best efforts and an overall decent job by cast and crew, I enjoyed Far from Home far more than Spidey’s first outing. This felt more full and complete of a film rather than Homecoming where I felt it was a tad scattered. Hilarious and entertaining, but scattered. Far from Home gave me a solid foundation with the world recovering from the events of Endgame and Tony’s death while focusing on Peter wanting to continue life despite it pulling him to being Spider-Man. Then surrounding the core story, we have the comedy elements of his schoolmates, a high school romance fling, and a international field trip.

Now first off, one thing I would like to address, which is also a critique of mine that I have been going back and forth on, is the juvenile and “teen film” feel of both Homecoming and Far from Home. On one end, yes, they are juvenile feeling films. I believe it was one of my hard critiques of Homecoming. However, now with Far from Home and plenty of time to cook over my thoughts, I also appreciate this angle taken by Marvel/Disney and the creative controllers. We have reached the end of our heroes, the original Avengers. Tony, Cap, Black Widow and more have passed. Others are taking up new meanings in life. So where does that leave us? The older (yes we’re old, deal with it) fans who have been here since 2008? Well that leaves us exactly where Marvel wants us. They know we are going to keep coming back as long as the rolling Marvel credits are there in front of the film. What they need and have been doing is appealing to the new generation. We are raising our kids and telling our young cousins that they need to watch these superhero movies. What better of a move to make than creating a film based on a web-slinging kid from Queens? These younger generations have their Tony Stark/Robert Downey Jr. to grow up on and the guy is quite fantastic. Tom Holland as Spider-Man is ushering in legions of new fans to pile on top of us old folks and guess what? It is working. Until Marvel creates an atomic bomb of a film, we will keep going, the new fans will keep forming, and the MCU will continue to reign.

Alright, conspiracy theory and marketing plan aside; “Spider-Man: Far from Home” gives us a squad of hilarious and engaging characters. These characters played by their respective actors are incredible. Do I have to even begin with Tom Holland? I have been a huge fan since his first showcase as our friendly neighborhood Spider-Man. He is an incredible young Peter Parker. He nails his witty innocence to perfection. He is an incredible Spider-Man, being athletic, reluctant, heroic, etc. He is my Spider-Man (Sorry Tobey, I still love you) and I am all in for him.
Jake Gyllenhaal. WOW! What else is there to say about this man and his filmography? “Brokeback Mountain”, “Nightcrawler”, “Nocturnal Animals”, “Southpaw”. This man puts his all into his performances and specifically, he is quite the convincing psychopath. All eyes are on him as he plays Quentin Beck, aka Mysterio. He is wild, he is convincing, he is meticulous, he is the perfect fit for this role and without spoilers, just take that for what it is worth.
The entirety of the supporting cast do wonderful to bring energy and flavor to the film. Again, as I said before, sure this humor that the cast brings in may be a bit childish and unnecessary but for me, it brought a solid amount of entertainment to my eyes and that is all I could ever want in a movie. Jacob Batalon (PHILIPPINES REPRESENT) is hilarious as always. Zendaya has an awkward and dark humor to her throughout the movie and it works so well. Jon Favreau may have stolen the show as my favorite supporting role here. He is so important and funny to the underlying story of it all. Tony Revolori as Flash Thompson put a bit of fun energy in too. Lastly, Angourie Rise as Betty Brant is my sleeper hit of the movie.

Now, aside from what I was saying about the teenager feeling of the movie which works both in favor and against the film for differing reasons. I have other complications with the film that enters the realm of spoilers. So go below all the fluff stuff about the rating and the gifs and check the spoiler section and let’s talk there, eh?

The Wrap-Up:
“Spider-Man: Far from Home” does it again for Marvel. The movie is just plain old fun from beginning to end. It is ushering in legions of new fans while maintaining the OG’s. Even though there is an apparent juvenile feel to the movie, I still enjoy myself when I spend money on a ticket and spend two hours of my life watching these movies. I am here for entertainment and that is exactly what I got. Some story points have their issues and I will address those shortly but overall, bravo Marvel and Spider-Man.

🎶Spider-man Spider-man, he can do what spiders can. Dooooooo do do dooooo do do🎶

Spoiler Intro and “The Blip”
*EDIT
Through conversation with some friends, the explaining of the people who “blipped” were the one’s who stayed the same age and everyone who stayed aged as usual. Just a misunderstanding on my part. The concept is still dumb though, lol.

ALLLLLLLRRRIIIGGHHHTTYYYY THEN time to get to it. Let’s just kick it right off. As I alluded to, some elements of the movie affect my rating (as if an 8 isn’t good or something). Beyond the teenage vibe of the film these other elements are mostly open questions that I either missed or just does not make sense (maybe just for now?). First, “The blip”. At first I thought this was just a high school term that Peter’s school used but then all the adults were saying it too and to me, it just sounds plain stupid. Personal gripe but sue me. Also, The ones that blipped aged five years forward while those who did not stayed the same. For one perspective, sure, it is a funny concept, but what about the heroes that blipped? Do we argue that since they are genetically altered, they didn’t age? Peter didn’t age? Or at least looked like it. T’Challa in Endgame did not seem to have age (except maybe way too brief of a moment to make that judgement call). Pepper? Aunt May? Shouldn’t Groot be bigger? I don’t know, it is just strange to me and in some ways it kind of makes the disappearance of 50% of all life feel like a joke. I mean, c’mon… We’re calling it “The Blip”?

I spoke super briefly about this earlier and here it comes in full. Happy Hogan is a character played by the beloved Jon Favreau. Happy’s character has developed beautifully from the time of Iron Man 1 to now. Amazingly, I write this section due to the spark that was created by my lady, Abby. She brought up a comparison between Happy from Homecoming vs. Far from Home. She said how the two were vastly different going from a pre-Tony to post-Tony. Pre-Tony gave us a rough and by the book Happy. Post-Tony we got the father figure of Happy due to the lack of father figure Tony. Her making this comparison slapped me in the face. I didn’t even think about it as I was just invested in Happy as the character and the entertainment I got from him. As I said, essentially it is amazing to think about Happy from Iron Man 1 to Homecoming then in an instant switch to Happy in Far from Home.

Final End Credit and Talos
The final end credit we see quite the con job. For the film’s entirety, we see Nick Fury and and Maria Hill throughout the whole duration. By the end credit, we see the two driving and then they shift to our favorite Skrull, Talos, revealing it has been him and his partner the entire time.
So… Ok, this is funny. But again, funny can only work so well while sacrificing quality. Luckily “Spider-Man: Far from Home” is damn entertaining and salvages its 8/10. Bringing the focus back to this switch-a-roo, with it being Talos the entire time. How did he know the secret code exposing Beck/Mysterio? Do they gather the memories of those they shift to as my friend, Jalen, said? Did Fury just pick a random phrase out of his man of mystery bank and tell Talos about it? A little reaching for my taste but alright.

Mid Credit/ Peter Parker is Spider-Man
HUGE! This is the kind of after credit that we, as fans, deserve. Give us a cliff hanger. Shell shock us. Make us WANT the next film. Here we see Mysterio pulled off one last illusion and sent a video out to the masses “showing” Peter taking “control” of the drones and initiating a kill order. Then announces that Peter is Spider-Man. Once again, HUGE. Loved it.

And that is about it for the spoilers! It has been so fun talking about this movie. Let’s chat and let me know what you thought!