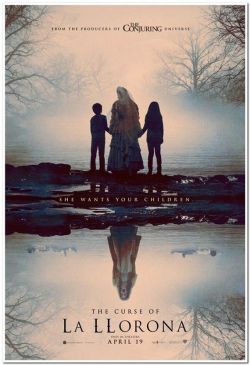 The Intro:
“The Curse of La Llorona” seemed to have flown pretty low on everybody’s radar. The marketing was not as extreme as other films within The Conjuring universe (and yes, this film is loosely connected). I initially got pretty excited when James Wan revealed he was working on this new project but it quickly faded from my memory. Now the film is out and I had the chance to catch it. Time to break down horror film, “The Curse of La Llorona”.

IMDB Summary:
“Ignoring the eerie warning of a troubled mother suspected of child endangerment, a social worker and her own small kids are soon drawn into a frightening supernatural realm.”

The Oberrating:
I have to admit, “The Curse of La Llorona” is quite entertaining but for reasons that might be strange to some. For one, I appreciate the jump scares. For fans of the jump scare and even those who are easily scared and get a thrill out of it, this film is for you. They did not scare me all that much but they were solid.
Story wise, we get a typical supernatural horror story. Nothing too impressive here but it is enough to drive the story, keep one curious, and at least find some value in. One thing I appreciate with “The Curse of La Llorona” was how curious it kept me through the introduction period of the film.
On the unexpected side of things, this film was funny as hell to me. If anyone really knows me, my friends and I typically get a good kick out of these horror films when people go flying across a room and all sorts of supernatural phenomena happen. “The Curse of La Llorona” is chock full of these kind of hilarious moments, if you are one to laugh at horror movies which ultimately makes these films pretty dang entertaining.

The Wrap-Up:
Besides being a purely entertaining film, “The Curse of La Llorona” is cut and dry. It is a jump scare supernatural horror film. There is not much else to it which does not give it too much purpose or quality in all honesty. Same supernatural story engine, scare tactics, and the same “survive at all costs” vibe. It is apparent that James Wan had his influence over this film as he took to the producer chair. With that, this became an enjoyable watch for me. Entertainment drives this rating up but do not expect anything extravagant.