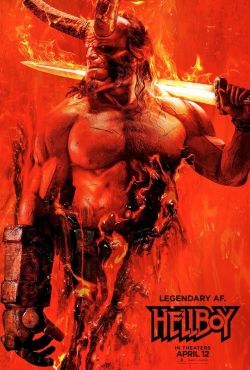 The Intro:
Guys, I was SO hyped for this film as it got closer and closer to the time for me to watch it. First off, I am a huge David Harbour fan. Love him in “Stranger Things”, love him in just about anything. I mean, have you seen those Tide ads? Masterpieces. Second off, R-rated Hellboy film? C’mon!! I dreamt of the Ron Pearlman/Guillermo Del Toro Hellboy of being rated R, but that dream never came to be. But I can be satisfied with David Harbour… Or will I? Let us get to that Oberrating.

IMDB Summary:
“Based on the graphic novels by Mike Mignola, Hellboy, caught between the worlds of the supernatural and human, battles an ancient sorceress bent on revenge.

The Oberrating:
Yeah, so about that excitement… It was short lived. The remake of “Hellboy” crashed and burned hardcore in my eyes and for a plethora of reasons. To start, I will just focus on the story. Honestly, it was boring. Nothing convincing at all. It ultimately became a really lackluster father/son movie instead of being anything close to a comedy, action, monster movie… anything! The villain, Nimue aka The Blood Queen (played by Milla Jovovich) was a stereotypical ultra powerful villain that was slain out and now has resurrected to return to her villainous mission of revenge. She also was quite boring and unconvincing. Any subplot was forgettable on top of the main story lines as well. If you can not catch the trend, this movie was utterly forgettable besides how bad it was.

On a production scale, this film felt like a complete mess and was all over the place for me. Besides Harbour in his Hellboy get up, the effects overall were quite bad asides maybe one or two characters/sequences among the many other monsters and sequences that were painful to watch. It really just felt like a high budget B-movie. The one and only redeeming quality of the film would be the violence and gore sprinkled out through the film. When the film wanted to get violent, the film really let itself get violent. For fans of this kind of action, sure, I will give the production a weak thumbs up.

Quite possibly my biggest gripe with this film is what I see as “Hellboy” consistently scratching the surface of being an even partially entertaining film. For example, consistently in the film we just barely get David Harbour’s Hellboy being a sarcastic asshole which could have translated into some solid R-rated comedy. Instead, this minimal comedic material just makes me wish I had even a bit more so I could enjoy the film but instead, I got nothing.
On that same note, we barely get a lot of quality action between Hellboy and his foes. The scenes we get are lackluster and quick. If they are extended in anyway, they look horrible thanks to some dicey effects. Eventually there is one scene in which I WISH that was all throughout the film but instead it was quick and at the very end of the film. Give me R-rated sarcastic asshole Hellboy kicking the shit out of his enemies and you have a happy and entertained Oberrated review. Instead… you have this.

The Wrap-Up:
Not much to sing about here, folks. There are not many positive notes because there simply are none. A sloppy mess of a story that left me annoyed and bored. I mean, c’mon, I went to the bathroom in the middle of the film… I NEVER LEAVE A FILM! Ugly effects, a longing for what could be, and simply disinterested father/son story line. It just was not for me, man. Do not spend your money on a outing to the theater. Catch “Shazam” or “Captain Marvel” again. Or buy yourself a beer. That would be money well spent.