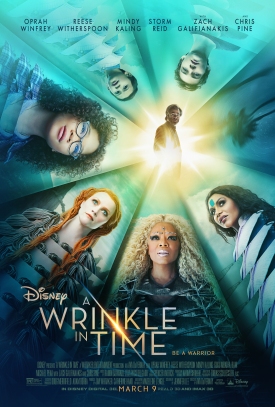 The Intro:
Sometimes, I find enjoyment in these requests where my readers want me to view a film for the sheer fact that they believe the film is terrible and they want me to suffer and review said film. It has happened a couple times now and today, my dearest friend Logan has chosen to drag me across an hour and forty-nine minute bore-fest. Well, as you already know that bore-fest is “A Wrinkle in Time” and this is the Oberrated Review for it.

IMDB Summary:
“After the disappearance of her scientist father, three peculiar beings send Meg, her brother, and her friend to space in order to find him.”

The Oberrating:
The reviews have been overwhelmingly negative. My friends who have seen “A Wrinkle in Time” have overwhelmingly told me negative things about this film. Now, I have put my eyes on this supposedly overwhelmingly bad film and I can now say… Yeah, it is kind of bad, in my eyes at least. “A Wrinkle in Time” just simply does not add up enough to make it an even half decent film. To begin, the pacing of this film is ridiculous. We are quickly introduced to Chris Pine’s family. Shortly after, he is missing and the family has gone on without him. In no time, we are abruptly introduced to the fairy godmothers, or whoever they are, in the form of Oprah Winfrey, Reese Witherspoon, and Mindy Kaling. Next, we are traveling through “space” and into new dimensions, casually hunting down the location of Meg’s (Storm Reid) father, and ultimately finding him locked away in some strange darkness space jail. This whole timeline moves so fast with absolutely minimal character development to attach yourself to any of the characters. The final verdict for this story is that it is just downright forgetful.

Performance wise, the film is almost as lackluster as the plot and its pacing. Meg’s character, although understandably broken and distraught at the “loss” of her father, is boring and unmotivated even in her high points of the film. Calvin is a boring yes-man that virtually serves no purpose to the film. The trio of Witherspoon, Oprah, and Kaling are entertaining in the least of ways. Witherspoon easily comes in as my favorite of the three, and that is being extremely generous. Oprah is unconvincing, Kaling is downright annoying. This script is terrible for the talent set on this casting list. Of all the cast, I enjoyed Deric McCabe as Charles Wallace, but even here, he has a character turn which turns me off to the character and hurts my view of the film.

The Wrap-Up:
“A Wrinkle in Time” just does not add up to anything special. The story, the performances, the characters, just the whole damn thing. It is boring, uninspiring, and empty. As my friend Jason said, this is what happens when a big studio throws money at you and says “Here, make something”. Glad to have gotten this request out of the way. Now to let this film fall in the far back of my memory for all of eternity.