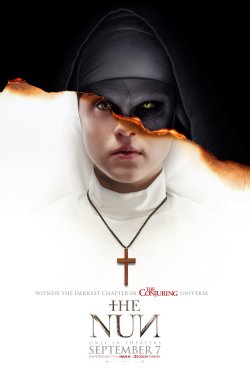 The Intro:
The Wan-iverse, as many of my readers know, is easily a batch of my favorite recently released horror flicks. Once I came to know that “The Nun” was actually greenlit to be made, I was ecstatic. Valek (The nun) was easily the strongest and most impressive part of “The Conjuring 2“. To such a point that Valek’s presence within the film had me reeling back in my seat the first time I watched the film. With all this considered, I expected great things from “The Nun” and I figure it would be pretty hard for it to fail for me. With that said, it is time to tackle the next piece in the Conjuring Universe.

IMDB Summary:
“A priest with a haunted past and a novice on the threshold of her final vows are sent by the Vatican to investigate the death of a young nun in Romania and confront a malevolent force in the form of a demonic nun.”

The Oberrating:
I said it would be hard for me to be disappointed in the film, well, it happened. All things considered though, my final rating is not an absolute fail, but it was no where near what I expected. For myself to begin, I will jump straight into the positives of the film.

If there is one thing The Conjuring Universe does well, it is scares. Now now, as I always do, judging and praising scares is a hard thing to do because not everyone gets scared as easily as others. I am not one that scares easy and every single time I praise a scare, there is some reader or a stray comment I see that goes, “THAT MOVIE WASN’T SCARY AT ALL!”. Scares are a tough thing to do, especially to a seasoned horror genre fan or simply just someone with a iron gaze. I judge scares on their uniqueness. We live in a flooded market of Hollywood Horror where jump scares are shoved down our throats and we see the same s*^$ every film. The Conjuring Universe has jump scares but they have always been creative and fresh material. “The Nun” continues this trend and the scares of this film are easily the strongest piece of the film. Unfortunately, the best scare is seen in the trailer, in my opinion. But, there is one other scare that I absolutely loved. On top of that one, just about every other scare is well done, to boot. All in all, if you scare easy and love that fact about yourself, this movie will more than likely do the job for you.

Another feat of this film that lands on my good graces is the performances/the characters. Our three lead characters of Father Burke, Sister Irene, and Frenchie (Demián Bichir, Taissa Farmiga, and Jonas Bloquet) are all solid characters. Although their introductions to the film are a bit rushed, I felt interested in the characters as the film carried on.

Now, let us begin with the negatives. A quick shot at something I was bothered by was the panning camera scares and appearances/disappearances. This element is done to absolute death in “The Nun”. Ironically, I have always appreciated this kind of horror trick when done well but I was completely sick of this by the time it was done the third time.

My major glaring point which heavily affected my reception of the film was the overall story of “The Nun”. For me, it was just odd and quite a reach. What I mean by this is that for one, I understand this universe is already a fantasy supernatural type franchise. Myself, I typically am accepting of oddities and far-fetched concepts when it comes to fictional settings. “The Nun” took it just a bit too far, in my opinion. Now I understand when we are dealing with the concepts of nuns, religion has to be a part of the story. However, this story goes pretty wild with “what it takes” to combat Valek and whatever darkness he brings to the world. Without spoilers, I may have to simply end it here. Leaving you with the fact that this story just is a bit of a reach in order to make it a “cohesive” story.
On top of the story, I find it hard to believe that James Wan was involved in the writing for this story. I have watched many of his films and practically studied them. “The Nun” seems way off of his style of story-telling and I feel his name is attached for added promotion versus his actual activity with the story. Now I could even be wrong here and Wan had equal hands on with Dauberman. Regardless, the story has some silly moments that some other people may not find funny. As well as some pretty cringe-worthy one liners.

The Wrap-Up:
As I opened up The Oberrating, “The Nun” is not a full out failure, no where near actually. But it was no where near what I anticipated. Valek (The nun) in The Conjuring 2 was such a powerhouse handful of moments. Hell, even his ultra brief appearance in “Annabelle: Creation” made me choke. With these powerful moments, I expected and anticipated “The Nun” to rock my world. Especially on account I gave “The Conjuring 2” and “Annabelle: Creation” both a 9/10. Instead, I was met with a far-reaching supernatural fantasy story. A job well done on the scares but a forgetful and silly job on a compelling plot.

no copyright infringement is intended