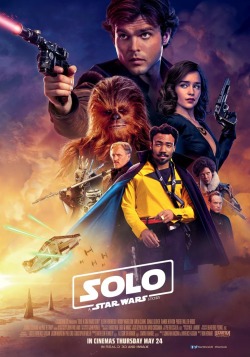 The Intro:
I have been war torn with what Star Wars (Disney) has been doing with the franchise. On one end, I am against the idea of Marvel-ing the universe. I wish to have it simply be the linear story line, wait a couple years in between to keep the hype, and enjoy a well produced, well thought out film. Then on the flip side, of course I am going to continue watching the solo spin-off films to see what else they can cram into this universe. With that said, here we are with the Oberrated review of “Solo: A Star Wars Film”. It has been quite the interesting run for this film. With many people boycotting the franchise due to the “failure” of “The Last Jedi” and an equal amount of others going to see the film and leaving with generally positive reviews, I was eager to finally get my eyes on this piece of work.

IMDB Summary:
“During an adventure into the criminal underworld, Han Solo meets his future copilot Chewbacca and encounters Lando Calrissian years before joining the Rebellion.”

The Oberrating:
“Solo: A Star Wars Story” was entertaining without a doubt, but this was also easily the safest Star Wars film Disney has made. We will begin with the positives. Again, the film was fun and entertaining. From start to finish, I was actually impressed and invested with Alden Ehrenreich as Han Solo. My early expectations were that I was not going to be impressed with him. I did not see the resemblance and something did not click for me, but I stand corrected with this movie now under my belt. Not only was I impressed with Alden but I was largely impressed with the whole cast in general. No one was a bore to watch on screen, including Emilia Clarke who has been scrutinized in large scale films. Easily (and as expected) my favorite character was Lando played by Donald Glover. Glover is truly a master performer. Music, TV, film, you name it, this guy can do it.

The heist oriented story of Solo was also solid enough for me. Once again, I was invested, I did not feel bored, I was down for the duration of the film til the very last minute. With some twists and turns along the way as well as plenty of nods to the “future” of Han and Chewy together, the film was a fun mix of watching the current story unravel as well as watching the early life of one of our favorite rebels.

With all this said, I now return back to my statement that this film was played extremely safe with all things considered. A strong cast given mostly already established characters as well as straight-forward roles. A story about righting a wrong and in order to right that wrong, you gotta steal something. Straight-forward as well and an easy formula to follow while throwing some Star Wars flavor into it. After the heavily mixed reception of “The Last Jedi”, it is easy to understand that the studios wanted a safe film to follow that up. Plenty of comedy, plenty of action, plenty of flight, just enough Star Wars without taking too many risks.

The Wrap-Up:
Solo was a solid film and plenty fun for viewers of all ages. Personally, I enjoyed viewing the life that began the Han Solo that I know and adore. Despite some ultra lazy moments and the extremely safe route that the studio took to make this film come to life, it was entertaining. At the end of the day, that is what a movie lover can come to appreciate (most of the time). I look forward to what seems to be the next story in Han’s early life. That is, if this film can get off its feet and convince the studio to continue. Regardless, a specific event that happens in this film has me hyped for the possible future of spin-offs which alters my early opinion. Way to reel me in with some of my favorite Star Wars moments, Disney!

*11/30/2019 Edit: Brought score down from 7 to a 6 after my Star Wars binge leading up to the release of Rise of Skywalker. Not as good as a remembered. Way too forgiving when I initially rated 7.
Rating: 2.5/5