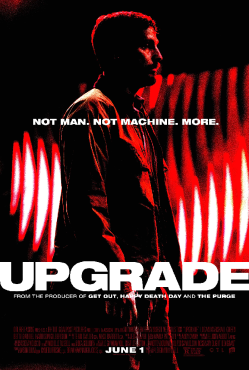 The Intro:
Show of hands, how many of y’all knew of this movie before this review? Three? Okay, three. I caught wind of “Upgrade” by way of social media. It happened to fall into my Twitter feed (@OberratedReview *wink wink, nudge nudge*) and since I viewed the trailer there, I was down for the film from that very second. “Upgrade” seemed like the right fit for me. Bloody over-the-top violence, comedy, and a seemingly run-of-the-mill revenge flick. For me, I saw flairs of “Hardcore Henry” in the trailer, minus the first person view. If it is anything like Hardcore, I was in for a treat.

IMDB Summary:
“Set in the near-future, technology controls nearly all aspects of life. But when Grey, a self-identified technophobe, has his world turned upside down, his only hope for revenge is an experimental computer chip implant called Stem.”

The Oberrating:
“Upgrade” is a wild and unique trip. The film explores multiple tones during the duration of the film and actually does this well. After my viewing of “Upgrade” it was interesting to reflect on the three tones I took attention to and it was even more interesting at the fact I enjoyed the three switch-ups.

Ultimately, I recognize “Upgrade” for its action and comedy. The action is quick and precise. The choreography is absolutely phenomenal. All the while Logan Marshall-Green, who plays the lead Grey Trace, is confused on screen yet hilarious for us as viewers as he has “no control of his body” during these fight scenes. As I stated previously, I felt some “Hardcore Henry” vibes from the trailer and upon watching the film, the action felt hand in hand. It was fast-paced, violent action and I loved every minute of it.

The cast of “Upgrade” was stellar which adds to my positive reception of the film. Again, Logan Marshall-Green is excellent from start to finish. I hope this marks the beginning of his lead role attention. (Maybe he can relieve Tom Hardy from playing his own twin? Who knows?)
Over the years, I have expressed my excitement for Betty Gabriel. In “Upgrade” she plays Cortez and once again is a knock out performance.
Supporting actor Harrison Gilbertson is a wonderful compliment to the cast as well. Gilbertson plays Eron, the young wiz-kid who creates the Stem implant. Looking like a young Leonardo DiCaprio, he excels beyond his looks and performs his part with excellence. Yet another performer I would like to see in more films in the future.

So beyond the plenty of good aspects of “Upgrade”. The film falls just above average in my eyes. Everything that I dubbed as a positive experience in the film was simply good but not mind-blowing to me. Despite the action scenes being stellar, there were not enough for me. The villains were not convincing enough for me. For my readers who have watched the film… The main villain is good, however. Lastly, the film seems to set up a possible sequel but I do not see how well that would work out. Although maybe that is a good thing.

The Wrap-Up:
“Upgrade” comes as a pleasant surprise for 2018. Produced by a subsidiary of Blumhouse Productions, Blumhouse Tilt. The film is hilarious and action-packed. A seemingly typical action revenge film that turns out to be a unique and mysterious ride. If you can manage to get a view in on this now or in the future, it would be well worth if for the violent action fans.