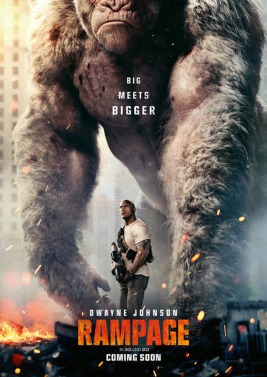 The Intro:
Dwayne “The Rock” Johnson: The Peoples Champ, The Brahma Bull, The Most Electrifying Entertaining in Sports Entertainment… Okay, maybe these are his WWE nicknames but when you mention these titles, the first thought goes straight to Dwayne “The Rock” Johnson. However, as we take a look at Hollywood Dwayne Johnson, statements and names come to mind like “Franchise Viagra” (No, I’m not kidding, look it up), one of the highest paid entertainers in Hollywood, one of the most influential men in the business, and titles can simply go on. Dwayne Johnson is easily one of the top guys in the entertainment world as he continues to pour out successful movies one after the other. Today, Oberrated takes on yet another larger than life Dwayne Johnson film in “Rampage”.

IMDB Summary:
“When three different animals become infected with a dangerous pathogen, a primatologist and a geneticist team up to stop them from destroying Chicago.”

The Oberrating
***Spoiler heavy because I don’t care about this movie one bit.***
Most of my friends and readers know I am a big Dwayne Johnson fan. I will continue to watch each and every film he puts out. With that said, that does not mean I will love each and every one. That statement heavily represents “Rampage”. Early on, I remained skeptical of what could come from the film by the time the credits rolled. Sure the trailer seemed action-packed with an ever-so-witty Dwayne Johnson leading the charge but as always, the trailer showed all the best scenes. By the time I finished the film, I left underwhelmed. I felt like I desired more and I could not put my finger on what that was… Just kidding, I knew exactly what it was and I am about to tell you in a spoiler heavy way.

For one, I want to focus on what I will call the Transformers Effect. Before I dive deeper, if you do not know, this film is an adaptation of the 1980’s video game also called “Rampage”. It primarily features large monstrous animals destroying cities. With that said, I am not sure if this is just me but when I see something titled “Transformers” or “Rampage”, I expect to see a lot of Transformers and a lot of monstrous animals. Now when a film activates the Transformers Effect, that means we see humans at the forefront of the film instead of what we want which is said monsters or Transformers. Throughout “Rampage” we see momentary bits of monster action before we shoot straight back to the human story line. On top of that, I expect and desire to see these monstrous beings fighting each other and/or fighting the humans but even this is cut to maybe 15 minutes total. Not what I want and not what I like.

Speaking of humans… I honestly felt no connection to any character. Maybe Davis Okoye (Dwayne Johnson) a bit because he loved animals and I’m a baby for animals, but it stops at just about there. Everyone was one dimensional. Every character was boring. There simply was nothing about this movie that made me want to care or pull for anyone. The film barely featured the animals which would have me root and support them and the film barely gave me a character to get behind.
Remaining on the topic of one dimensional characters, the villains of “Rampage” were hardly anything special. Claire and Brett Wyden (Mailin Akerman and Jake Lacy) are not intimidating in the least bit. Brett is eccentric to an unbelievable level. Claire is an unenthusiastic (failed) badass. Both combining for a boring team that you simply shrug off by the time they meet their silly demise. (I told you it was spoiler heavy.)