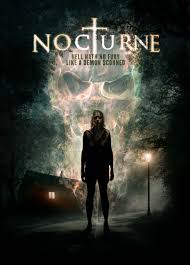 The Intro:
It becomes tough to rate and review a movie, especially when it is a B-rated horror flick. With this review, we take a look into a supernatural horror film called “Nocturne”, requested by my dear friend Ashley. Watching the trailer, I sensed absolute unexplained phenomena and a party that gets a tad out of hand. Once again, I tempered my expectations but from the trailer I saw some hope in this low quality film.

IMDB Summary:
“A girl running from her past is forced to confront her future when her friends perform an impromptu seance. Dirty secrets are revealed and an uninvited guest joins the party.”

The Oberrating:
On one end, “Nocturne” is profoundly obvious that it is a B-rated horror movie. There is no hiding that in the least bit. Primarily, a focus of mine was the horrendous camera work. Nearly every single scene was painful to watch as the shaky cam was in full effect or a super awkward angle was being taken. I know of and have seen high school shots and collegiate shots done way better than what this film produced. Pacing away from the seizure cam, I look at the acting done by the small cast. On one end, they flashed great efforts bringing scenes to life. Primarily this is to the efforts of Hailey Nebeker who played Maren. Although this attention does not excuse her of some other moments that could be seen as cringe-worthy. She is easily one of the stronger members of the ensemble. As for the rest of them, my statement still stands. This is some B-rated horror performances, no doubt.

In regards to this supernatural horror movie. I do stand impressed in some ways in regards to the absolute absurdity that takes over this unfortunate group of teenagers. ***Minor spoilers ahead*** Once the possession takes over Maren and she begins to terrorize the rest of the group. She absolutely offs them all with ease and in sadistic fashion. ***End spoilers*** Despite being a bit hard to understand what is going on and exactly why, I can not deny the ingenuity of the horror kills brought to us by director Stephen Shimek. For being a B-rated supernatural horror, I am a bit impressed with the final product come time for the credits to roll.

Now, now, now… Just because I sung a little bit in favor of the elements of horror within this film does not mean I am fully on board with it. Far too much of “Nocturne” is unexplained and/or is barely talked about. A major point of things being unexplained is why the whole supernatural phenomena is happening in the way it is. Overall, I feel as though this movie had opportunities to be great but ended up falling just short of being an impressive B horror flick.

The Wrap-Up:
“Nocturne” turned out to be an interesting ride. Despite very evident B-rated type material. The material was interesting and unique that resulted in a positive supernatural horror flick. Even though I enjoyed it for a few qualities it possessed, I have to call a spade a spade and give it a 5 out of 10 for the obvious faults that the film contained. If you stumble across “Nocturne”, it is well worth a watch for entertaining and wild supernatural fun.