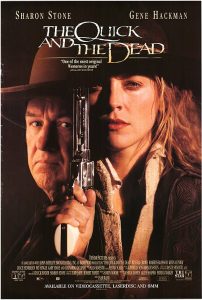 The Intro:
I have been slacking on these requested reviews and I apologize but I PROMISE I will knock these out of the park ASAP now that we are live on this new site. In the meantime to begin my requested review spree, I have 1 of 5 requests from the man himself, Jon Delval. The first installment is on “The Quick and the Dead”. As usual, I did not know what to expect by the time I pressed start so here’s to hoping for a positive Oberrating!

IMDB Summary:
“A female gunfighter returns to a frontier town where a dueling tournament is being held, which she enters in an effort to avenge her father’s death.”

The Oberrating:
I have an unknown liking for any kind of Western. I do not know where it stems from since I can not recall anyone in my family liking Westerns all too much besides some occasional conversation with my father about classic Clint Eastwood films. Nonetheless, I genuinely enjoy a good Western when it comes my way. For “The Quick and the Dead”, I add yet another film to my list of positive experiences.

For me, “The Quick and the Dead” was a violent and fun experience. When a lot of people think Westerns, they think about the classic shootout and this movie is constant shootouts throughout the entire film with a dash of story.

While the action was a clear constant that kept my favor another element of the film made me really enjoy it and that element was the performances by certain actors in the film. The performances of Russell Crowe and Gene Hackman are something special. Their characters are interesting to watch and their stories alone are what I was genuinely interested in. Exceeding these two was the young performance of Leonardo DiCaprio as Kid. Despite a supporting role, each moment Leo was on screen was a delight to watch. The charisma and presence bled out of the young Leo and thinking back to this time, it is easy to see why his career has led to where he is now.

Now despite a good amount of takeaways from the film that had a positive effect on me, I was a bit put off by some aspects of the film. One of these are what I would call the Raimi effect. He has a certain style to him when he directs movies and it can either work well or seem off-putting. For instance, it works well with his classic Evil Dead films but then in some aspects of Spider-man and even this film, that style doesn’t fit or sit well for me.
Another piece was actually the lead, Sharon Stone. Ms. Stone’s character was not an entire disappointment to me but I found myself not being pulled into her character for a majority of the film. She had moments where I enjoyed what her character was doing and I felt she was powerful in those moments but in most, she seemed to be second seat to the surrounding cast.

The Wrap-Up:
“The Quick and the Dead” lines up as another Western style film that I can get behind. It was an entertaining ride and overall fun shoot-em-up action lined with solid performances of house names we all love. Regardless of tiny criticisms from myself, it lands on the positive side of an Oberrating and a 3 out of 5.