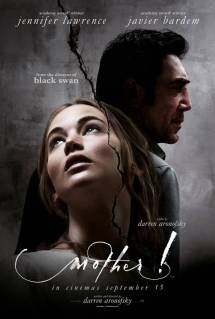 Sources:
http://www.imdb.com/title/tt5109784/?ref_=nv_sr_1
http://www.imdb.com/title/tt5109784/fullcredits?ref_=tt_cl_sm#cast
***SPOILERS SPOILERS SPOILER SPOILERS***
When I make spoiler sections, you know the movie is crazy. Ok so… ‘mother!’… Obviously as previously stated, this film is meant to be viewed and interpreted. By no means is this a film meant for surface-level watching unless it is, who knows. Darren, hit me up and let me know. Anyway… This film is designed to be interpreted and after much conversation and research, my friends and I have come to a mostly agreed upon conclusion. ‘mother!’ was about mother nature or it was the story of the Bible, and/or it was even a blend of the both. For some quick examples but I would like you to draw the comparisons yourself if you watch… Ed Harris – Adam… Michelle Pfeiffer – Eve… Gleeson brothers – Cain and Abel… Bardem – God… Lawrence – Mother Earth/Virgin Mary… You get it. Even beyond this comparison. A few lines within the film were spoken between a fan and Javier Bardem’s character. The lines were roughly, “I feel like these words were meant for me” – Fan “That’s because they were.” – Bardem. I especially liked this exchange because after conversing with my friends and interpreting and making claims to what the movie could have meant. I found myself reflecting back to this exchange and it applying to us now. Although the exchange was within the film, it also applied to us as the viewers. That we could make this film into whatever we may interpret of it. Whether it is the Bible, whether it is Mother Nature, whether it is today’s society, whether it is a loosely based comparison of a toxic relationship with another person or even a thing. Or even whether it is just complete shit because you do not like the movie and do not want to think about it. To each their own. My last statement on ‘mother!’ is that it is a one-of-a-kind film. You do not see films take the risks that Aronofsky and all involved with ‘mother!’ have taken with this film.
Thanks for reading, guys. This was a hell of a review to do.

One thought on “mother!”