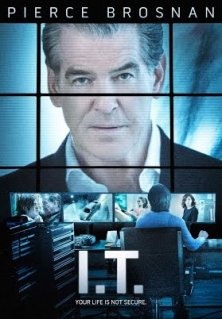 Requested Review from Chris Ebbert!
The Intro:
At first, my buddy Chris requested this movie and I was thinking, “Oh, he wants me to review the original ‘IT’ in honor of the new 2017 one coming out.” but then he told me it was on Netflix and I thought he was crazy. Then I saw the real title he was requesting and I got skeptical and partially excited, I guess? I had never heard of this one before and was impressed it was headed by Pierce Brosnan (although he really has not done anything stellar recently…ok…at all recently). So regardless of early impressions and mystery, I have finally gotten my hands on yet another Oberrated Requested Review. It is time for ‘I.T.’ to get Oberrated.
IMDB Summary:
“A self-proclaimed millionaire has his life turned upside down after firing his I.T. consultant.”
The Oberrating:
Hahahaha, that IMDB summary really just sinks its claws into you and makes you wanna see it, huh? Hahaha, okay, but really though, the movie is not as bad as that IMDB summary makes it out to be. ‘I.T.’ has the genre tags of crime, drama, mystery but in my opinion, I would even tag it with a dash of thriller as well. With that being said, that is one of the elements of this movie that is commendable. The mystery thriller vibes of the film when the story starts to heat up is quite enticing to watch and even creepy at times. Without a doubt, this is the best element of the movie for me.
The performances were also commendable. Spearheaded by Pierce Brosnan playing Mike Regan and then his counterpart, James Frecheville as Ed Porter. Without spoilers, Brosnan gets gritty by film’s end with desperation and Frecheville is insane with his performance.
With all that being said, the story elements of the film affected my rating for ‘I.T.’ heavily. While I enjoyed the thrill of the film and the performances as well, there were many moments within the story where I was curious as to why things were happening and also how it seems all too convenient that certain moments were possible. I will have a small spoiler bit below this paragraph for those who care but yeah, there are too many moments that are eye-roll worthy and just downright silly for me. This heavily affected the rating.
***SPOILERS***
Alright, once again… SPOILER… Ed Porter is the I.T. villain that gets shafted by Pierce (well, not really shafted because he is creepy as fuck but regardless…) and then goes and turns Regan’s life upside down hacking into his whole life. My whole issue with all of this is how drawn out the story gets when it can be ended extremely early. Again, I know it is drawn out for the sake of the film but come on. Ed starts to hack Regan’s life up. Regan is a multi-millionaire. He can not hire some ex-military tech specialist to counter-hack Ed? He can not organize a strategy with the feds to prove Ed is the guy hacking everything? Also, it is not like Regan was a credible and established businessman before the “fraud” that occurs in the film. You are telling me there is no one that will believe his claims and work with him? Lastly, he finally does hire a super rogue counter-hacker in Henrik played by Michael Nyqvist (Rest in peace) and he is able to dispel all of Ed programs in a matter of 24 hours? WHY THE HELL DID YOU NOT DO THIS EARLY REGAN?! *exhale* Ok, you get it… Just too many coincidences for my liking. Still not that bad of a movie though with other elements considered.
***END SPOILERS***
The Wrap-Up:
Not bad overall, ladies and gentleman. ‘I.T.’ gives some pretty dope performances lead by Brosnan and Frecheville. The mystery thriller vibe of the film is very solid to me, much to the efforts of Frecheville. The story was just too over-the-top for me to give it a stronger rating. Too many convenient moments that dictated the flow of the story and too many “come on, man” moments that were not believable in the least bit. So there you have it. This film is on Netflix as of right now, so if you would like to take a look for yourself or if you are bored and want some kind of thriller mystery film, I would definitely recommend this. Nothing mind blowingly good but worth a Netflix view for time-killing purposes.
Rating: 2.5/5