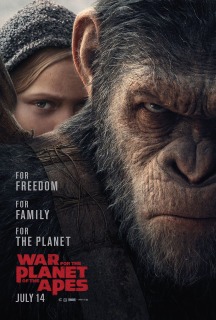 The Intro:
‘Rise of the Planet of the Apes’ came out in 2011. When it did, I was 19 and not knowing what I was getting into. Even at film’s end, I enjoyed what I watched but I had no clue how invested I was going to become in 2014. Once that year came, ‘Dawn of the Planet of the Apes’ blew me away and I instantly became excited for what was next. 2017 has arrived, ‘War for the Planet of the Apes’ is now available to mass audiences around the world, and the finale of one of my most unexpected beloved trilogies is about to come to a close. With an incredible amount of self inflicted hype for the film, my hopes are high and I only could hope that they would be satisfied. The trilogy is now about to become Oberrated.
IMDB Summary:
“After the apes suffer unimaginable losses, Caesar wrestles with his darker instincts and begins his own mythic quest to avenge his kind.”
The Oberrating:
My friend Mike brought up a great point that (sadly) describes this trilogy perfectly. This trilogy, in some ways, mirrors the Dark Knight trilogy. A solid yet shoddy intro film, a phenomenal second installment, and sadly a “meh” finale. Now trust me folks, I am not happy to say I felt this third film was “meh”. Ya’ll can challenge me as much as you want, I actually welcome it, but for a solid couple personal reasons, this film only landed as good of a rating that the first film did. Let me divulge before all of your heads spin.
First let us go with the good. A lot of good. The Apes films have always been magnificent pieces of film on the production front. The apes have always looked gorgeous. The score is simply phenomenal, in my opinion. The writing has always been something I admired, and this third installment lands all these elements just like its predecessors did. Split between performance and effects, Andy Serkis playing Caesar has always been a sight to watch. In all honesty, Andy deserves award attention for his performances, as he always has.
The emotional focus with close to every interaction between each ape was wonderful to watch as well. In some ways I even feel like watching these apes interact felt more powerful than most emotional interactions with live-action humans. Hate, fury, love, sadness, the whole works, the emotions run rampant throughout this film from the very get go and are impossible to not feel.

**Spoiler Heavy Negative Points**
Now, I do not believe I would be able to touch on my negative points without spoilers so either begin reading or come back later after you have watched but let us begin. One thing I was not a fan of was the incredible wrongful marketing of this film. The trademark poster (not used above) shows an army of apes staring down an army of humans but that is not at all near what truly happens. The true war in the film turns out to be a human vs. human war with a sprinkle of apes on the side. In all reality, the apes are captive for a large amount of the film. As marketed and as I expected, I thought to see a war between the two species when in all reality, the true “war” between apes and humans happened more so in ‘Dawn of the Planet of the Apes’.
Second, a glaring scene that bothered me a lot was a scene involving little Nova (Amiah Miller). In this particular scene, Nova walks straight into the war camp with armed guards standing near the huts, spotlights swaying in every direction, and surely guards perched on sniper towers or vantage points. Do any of these guards see Nova? No… Nova feeds Caesar, gives Caesar water, wanders between ape cages, gives her little ape salute and not one eye catches her. Sorry… That is garbage.
Caesar’s decision making is highly questionable as well. So, he chooses to seek revenge on Woody Harrelson’s character, and in doing so, he gets his entire ape troop captured. After realizing the consequences of his actions, Caesar says to himself, “What have I done?”. Fast-forward to the near end, Caesar frees his entire imprisoned troop of apes, has freedom staring him right in the face… What does he do? Says he can not escape Koba’s influence and chooses to seek revenge… Again. DID WE NOT JUST SEE WHAT HAPPENED THE FIRST TIME?! Ugh…

The Wrap-Up:
How beautifully well done this film was is what saves the film from being rated any lower and also what feels like the right ending to such an immaculate story does a good bit of saving as well. But certain plot points within the film just are far too glaring for me to excuse them and praise this film as so many people have been doing. Again, this is a fine finishing touch on the trilogy, I just felt it could have been done way better and without such reckless unexcused moments and actions. Production wise: It is simply gorgeous and well made. Structure wise: far too scattered with questionable motives and actions. Overall, the “meh” of the trilogy.