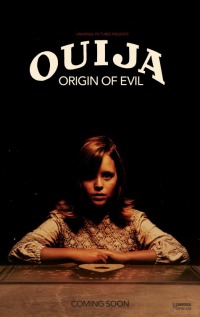 At first, the minute I heard there was going to be a sequel of the 2014 horror film “Ouija”, I wrote it off instantly. I despised the first one. It was a typical Hollywood Horror film, best served to the pre-teen crowd looking for a quick “scare”. Things changed soon after I saw who was directing “Ouija: Origin of Evil”. With Mike Flanagan at the helm of this film, I had a little faith restored in it. So what is Oberrated’s take on a film that had such an atrocity of a first installment? Can a talented horror/thriller director bring the necessary change to the series? Well, let us begin.
As a family of three add a ouija board to their business of scamming oblivious customers through fixed seances, the youngest of the family, Doris (Lulu Wilson), is overtaken by a dangerous spirit after she uses it herself, whom of which begins to terrorize the family. The remaining members of the family, Alice and Lina (Elizabeth Reaser and Annalise Basso), begin to try and get Doris back from the spirit.
First and foremost, “Ouija: Origin of Evil” may very well be the biggest surprise hit, in my opinion, of the year. I went from writing off this origin story because of how bad the first one was, then giving it some respect because the thriller/horror mastermind, Mike Flanagan, was tagged to it. Who, might I add, directed the hit-or-miss “Oculus” and made the fantastic Netflix exclusive “Hush” (Click here for my review of it). Now, I am here making this review, in love with this movie and now this series. Mike Flanagan masterfully created an origin story to a series that was so investing and so eerily creepy that it, at times, made my skin crawl. Story alone, this film keeps the audience so curious throughout the film until the very end when it hits you full force with consistent terror. This is not simply a jump scare movie, although it has its moments, I have just grown immune to them. I found the slow burn creepy actions and mannerisms far more terrorizing than an attempt at catching me by surprise. In a sense, the film toys with the audience as they expect to be scared but right when you think it may happen, it pulls off the trigger. A fantastic element of which I applaud Mr. Flanagan.
Beyond the film itself, I must bring focus to what Mike Flanagan did with this series. In 2014, “Ouija” came out and to most and especially myself, it fell flat. Far too many holes in the plot and an abundance of eye rolls and sighs at the frequent stereotypical horror scares. Two years later, Flanagan delivers not only an origin story that alone stands as a very strong horror film, but also delivers a film that makes the 2014 installment a crucial piece of the story. To the individuals who saw the first then watched this, many may sit in awe of how the 2014 film blended perfectly into this one. It caused me to have an irresistible desire to re-watch the original and be awe-struck at how genius this film truly is.
Now for the wrap-up, “Ouija: Origin of Evil” not only stands strong on its own as a masterful blend of slow-burn horror and fresh jump scares, but also stands strong with a story that sparks curiosity throughout the duration of the film and keeps you invested. Each actor and actress brought about such a fantastic performance each in their own right. I highly recommend this film and even encourage watching the 2014 “Ouija” afterward… just ignore the bad acting and stereotypical horror genre antics.
Rating: 4/5 (yes, you’re reading that right)