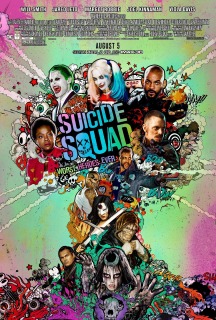 Here we are, one of the most anticipated movies of the year: ‘Suicide Squad’ has arrived. Hype has been massively generated for this movie between the expectations for DC to finally compete with Marvel’s films and also the all-star casting choices for major key players within the DC universe like Joker, Harley Quinn, Deadshot, and more. So how will the newest DC film fair in Hollywood? Will it suffer split feelings like its DC predecessor, ‘Batman Vs. Superman: Dawn of Justice’, or will it be a Hollywood blockbuster fans have been desiring?
‘Suicide Squad’ is about a team assembled against their will by a secret government branch. This team consists of some of the most dangerous criminals to ever set foot on the ground. The members of said team are Deadshot (Will Smith), Harley Quinn (Margot Robbie), Diablo (Jay Hernandez), Captain Boomerang (Jai Courtney), Killer Croc (Adewale Akinnuoye-Agbaje), Enchantress (Cara Delevingne), and lastly, they are led by Rick Flag (Joel Kinnaman), yet also commanded by the head of this secret branch, Amanda Waller (Viola Davis). As they are rounded up and prepared to be a team enemies have never faced before, an unexpected enemy arises and causes them to take on their first mission.
At first watch, the original reception for ‘Suicide Squad’ was less than great. Critics were tearing up the film with reviews and dropping the rating for the flick on Rotten Tomatoes down to as low as 20%, causing the fans to go into an uproar. Upon its widespread release, the general public got to use their own eyes to formulate an opinion and it resulted in a largely 50/50 reception. So what is the Oberrating? Well, I myself sit split and to such a point that I am going to break up the opinion section into parts.
The Good:
The film is entertaining, no doubt about it. The comedy hits well, for the most part, and the action is satisfying. The actors and actresses did well in their respective parts, some more shocking than others (i.e. Jai Courtney as Boomerang). While on the topic of characters, for me, Jared Leto as Joker was fantastic to me. Although he had very limited screen time, I was more than satisfied with his performance. He was weird and uncomfortable to watch and it worked for me. I feel that if he had a role in a feature length film as the villain, he would impress even more-so than he has done for some viewers. Another fantastic performance lies within Will Smith as Deadshot. While he easily steals the show, Deadshot/Will Smith commanded attention with almost every word and action. Lastly, among notable characters for me, Diablo/Jay Hernandez was great for me.
The Bad:
So while most of the good was within the performances and entertainment spectrum, a majority of the bad lies within production, writing, and overall the creative direction. The film was re-shot for more comedy to be inserted into the film. With this knowledge and now viewing the movie, the comedy that was present felt unnecessary at times. Many lines fell flat for me and could surely have been done without… A large amount of criticism with ‘Suicide Squad’ was about the amount of flashbacks seen. I would have to agree. Although some were most certainly entertaining, others felt pointless…  The soundtrack created issues for me as well. Far too often were sequences flooded with mainstream music and not just one song, but followed up by another and even maybe another. A friend of mine, Shawn, said something which describes it perfectly as, “It felt like watching a music video at times.” I believe in letting a film tell itself. Music far too often drowns out the moment you are watching in order to increase dramatics. ‘Suicide Squad’ fell victim to this concept… All in all, the film felt rushed. There are reports out there stating the production was rushed itself, so who knows. At the end of the day, while it was plenty of fun and it was entertaining with great performances; the underlying issues drown out sheer entertainment, especially with the direction DC is trying to pursue. ‘Suicide Squad’ is an “alright” flick for me but better than ‘Batman Vs. Superman’, and that is a victory for me and my desire to enjoy a DC film.
Rating: 2.5/5