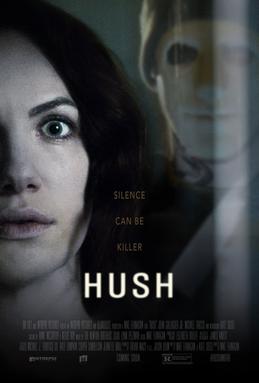 This is a first for me. This is the first film I am reviewing that was not shown in theaters but shown on Netflix exclusively. For those (which are probably plenty) that do not know of this film, ‘Hush’ is a horror/thriller flick starring a small cast with a very clever story to follow. For a little more of a tease, click here for the trailer. Now why would I do a review on this film? Thanks for asking… I am doing this because this actually was a fantastic film to me. I enjoyed it way more than I was anticipating to but hey, we will get to the personal details a little later on.
‘Hush’ follows Maddie (Kate Siegel), an author whom of which is deaf and mute as she is trying to write her newest novel in her secluded home in the woods. At first everything seems fine but when day comes to night, she finds herself hunted by an insane killer (John Gallagher Jr.) who begins a maniacal game of cat-and-mouse as he stalks her around her house. Survival becomes the only goal as the two face-off.
Again, I was utterly shocked by how much I enjoyed ‘Hush’. At first, I was merely watching this due to the recommendation of a few friends (Shout out to Jalen, Shawn, and Grant), but then as I kept watching, the acting all on its own and the intensity of the scenes pulled me farther and farther in until I was unable to pull away from my screen. To reiterate; Maddie is a deaf and mute author. The film has moments of natural viewing where you see and hear everything as usual but it also goes into moments where you are forced to hear the environment exactly the way Maddie does. This immensely increased the intensity in some scenes as a loud environment was turned into a silence, causing the audience to hold their breath, or at least I did. To piggyback on this, with Maddie being deaf and her being the main character, the focus is then turned to the body language and overall the acting rather than the common babble of wordplay that is so often clichéd in horror/thriller films. With this being said, Kate Siegel knocks this performance out of the park without saying one word. Lastly, John Gallagher Jr. is phenomenal. Playing the villain in this role, he presents us with a diabolical cold-blooded killer who seems his sole purpose is to kill for sport. His antics and mannerisms are bone-chilling and with this role and ’10 Cloverfield Lane’ he has easily placed himself up there on a notable actor scale.
Again, ‘Hush’ can be found on Netflix. I highly recommend this flick for the fans of cold, bone-chilling thriller/horror. The small ensemble cast takes this film and runs it home.
Rating: 4/5